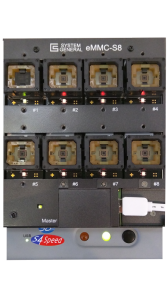 The eMMC S8 socket board is specifically designed for fast Duplicate / Programming eMMC devices. It can be used on the manual programmers T9200+, T9800, and the automatic programming systems AP710, AP700, AP720, AP760 and AP900. It is thus not a pure eMMC duplicator but a universal solution which can be used for other component technologies. With a programming rate of up to 36MByte per second an amazing UPH is achieved even if big 32GByte components in use. By simply changing the socket cards it can be configured for different device packages, without having to restart the programming system. Each eMMC S8 has eight programming sockets and a socket for the master component. For automatic programming thus are 4×8 or 9×8 programming socket is available. So that the system is in a position to be able to program 32 or 72 eMMC devices simultaneously.